At the start of the twentieth century, the Netherlands was a trading nation with extensive overseas territories. Its interests were served by a quick connection to the colonies, especially the Dutch East Indies. Direct communication took place by way of electric telegrams, which required cable connections. Prior to this, the Netherlands was dependent on England and Germany. When the First World War broke out the disadvantages of this dependence increased. In 1918, the government decided to realise their own international communication network, independent of the neighbouring countries. After much political debate it was decided to build a long wave transmission station enabling permanent contact with the Dutch East Indies using radio telegraphs.

To establish the radio transmitting station they looked for an uninhabited, remote terrain so there would be minimum interference to the transmission traffic from the environment. The 450 hectare terrain was bought by the Dutch Ministry of Transport, Public Works and Water Management from the Dutch National Forestry Commission.

About 150 labourers from Amsterdam levelled the terrain. The antenna terrain was constructed as a circular plain with a diameter of approximately 1200 metres, a ring of five 212 metre high masts around a central mast at the foot of the transmitter building. The radio transmission centre was officially put into operation in May 1923, initially for Morse telegraph traffic. The developments in radio technology advanced rapidly. After a few years it became apparent that the long wave connections were outdated and too expensive. They switched to a short wave frequency for a higher signalling rate, better connections, lower energy consumption and smaller equipment.

The station initially operated under the name Radio Assel, but also became known under the name Radio Hoog Buurlo. 'Kootwijk Radio' was the international call sign for radio traffic. Queen Emma brought about the first telephone connection in 1929 with the Dutch East Indies with the legendary words: “Hello Bandoeng Hello Bandoeng! Can you hear me?". The first conversations, which invariably concluded with the Dutch national anthem Wilhelmus, were free as it was still in an experimental phase. Subsequently, people had to pay considerable amounts for a phone call to family members overseas. The PTT (state enterprise for Post, Telegraphs and Telephony of the Netherlands) tried to interest the public in overseas phone calls through advertising. Cheap family phone calls, only on Saturdays with 30% discount off the normal rates cost f 21 in those days for a three minute call to Java, for example. In those days the average weekly salary was f 25.

Staff recruitment began during the construction of the transmitter station. Some of the staff had to be reached and available day and night so should preferably live near the station. At the end of the twenties, about 200 people lived in Radio Kootwijk, a mixed and close-knit community in this isolated enclave of the Veluwe. The community spirit was thus very high. Many activities were organised for the community and always with an acknowledged request for support from the employer the PTT, also with regards to transport. There was in fact no regular bus connection with Apeldoorn. They arranged a school bus and market bus, a church bus on Sunday mornings and a football bus on Saturday afternoons. Children growing up there experienced wonderful childhoods in the middle of the countryside. The village had its own fire department, waste collection service, electricity and water facilities. Water was drawn from the pump houses by the water tower.

The exceptional and unique result of the main building, called building A, is derived from the interplay between necessity and the sources of inspiration. The building could, for example, not be built in wood because of the fire hazard of overheating due to radiation from the transmitters. Thus they chose concrete, which was a little known building material at the time. The building’s design was inspired by the transmission station in Naun Germany, a design by Herman Muthesius.

Architect Julius Maria Luthmann (1890-1973) worked for the Dutch Government Building Agency. Luthmanns' interest in Egyptian architecture explains the building’s appearance as a sort of sphinx. As well as characteristics typical of German Expressionism, the building had unmistakable elements of the Amsterdam School style. In this popular building style from the twenties, various artists often collaborated in decorating the buildings. Above the entrance door you can see a relief depicting a mask with an open mouth through which radio waves exit, flanked by two female figures listening, a European and an Eastern women, symbolising the connection between the East and West. The rear is adorned by a large arched window topped with an eagle.The eagle symbolises the freedom of the radio waves in the air, the flight of sound. Both reliefs are designs by Hendrik van den Eijnde, sculptor, furniture designer, graphic artist and illustrator.

Radio Kootwijk, as a 450 hectare complex, is situated in a very characteristic part of the Veluwe. The varied forestry can be seen from the roof of building A, or from the water tower. In clear weather the heathlands of Gerritsfles are visible and in the distance the white sands of the largest active sand drifts in Western Europe: the Kootwijkerzand. Typical mosses and grass species grow on the barren sandy heathland. Roe deer, red deer and wild boar are permanent residents of the area. The bird and insect species and reptiles are also typical in this part of the Veluwe.

The open heathland surrounding the transmitter building has a history of human interference. Old images clearly show what the open the terrain in the transmitter village looked like at the time of construction. It was leveled to make way for the construction work. Due to the heath plants with Canadian bird cherry and pines at the hedge of the terrain, the drift sand had to be restrained. The Dutch Forestry Commission has since reopened the terrain to show the original character of the transmission circle. The barren sandy heath ground is the perfect environment for exceptional flora and fauna.

As of 1962 the transmitter station provided long-distance connections for the maritime industry from the Netherlands under the call sign “Scheveningen Radio” and was part of the state enterprise for Post, Telegraphs and Telephony of the Netherlands. The last manager of the transmitter station, Martin Nieuwenhuizen, finally closed the doors in 1998. The KPN buildings and corresponding terrain went back to the hands of the Dutch State Forest Commission, who could then implement the redevelopment of the total area.

The redevelopment by the Dutch State Forest Commission focuses on creating a good balance between the corporate, cultural and public uses of the buildings and corresponding countryside. The core values of calm, space and darkness thereby form the framework. The cultural history, the location where the buildings were situated and the setting in the middle of the Veluwe, with its great ecological value are central elements.Radio Kootwijk is a place of connecting, experiencing culture and nature, of the present, past and the future. It is an intriguing environment that inspires new ideas. The buildings, drift sand and heathlands reinforce each other. It is the space that touches you. This combination makes Radio Kootwijk an exceptional place; a place that will be conserved for generations to come in an economically responsible way. 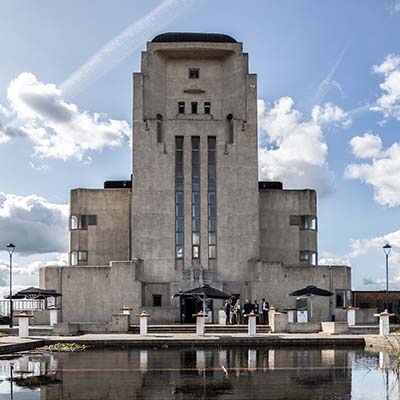 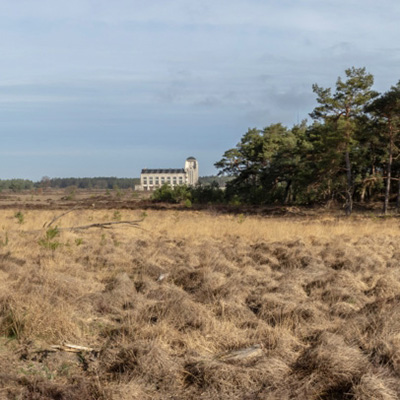 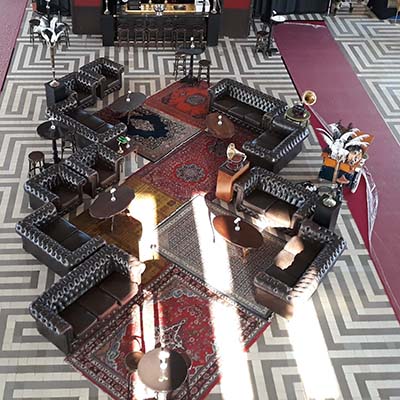 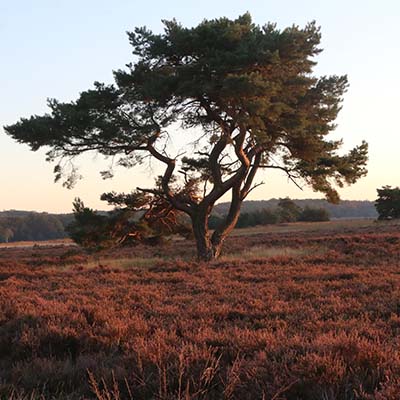